For my husband’s 30th birthday, he suggested that we travel to Montreal, Quebec to go to the 2017 Formula 1 Grand Prix du Canada.  Formula 1 is one of his greatest passions and I’m always up for a vacation, so I quickly agreed.

We absolutely fell in love with Montreal.  Honestly, ever person that we met was incredibly nice and welcoming, even with a minor language barrier.  The hospitality that we received was unbelievable and it has left us with a strong lingering to plan another trip back there… like soon!

For the race, there were many different tickets to choose from, depending on where we wanted to sit on the track.  Ultimately, we opted for the “Gold Package”, which allowed us to sit somewhere different on the track each day of the race (3 day total).

Day 1: Practice 1 and Practice 2
On the first day, we sat at turns 1 &2 (Granstand 12).  This was my favorite place to sit.  There was a lot of action and it was fun to see the cars try to get ahead of each other during these tricky turns! 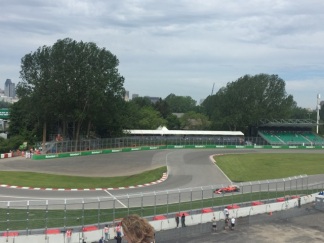 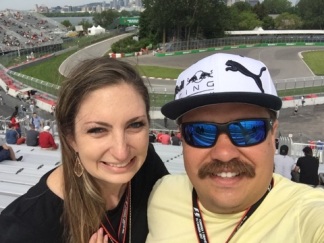 Day 2: Practice 3 and Qualifying
On the second day, we sat at the hairpin (Grandstand 15).  At this point in the track, the cars slow down significantly so that they can successfully make it around the turn. 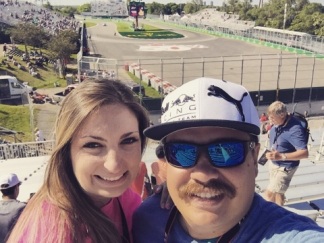 Day 3: Race Day
Of course, this day was the most exciting!!  We sat at the start/finish line (Grandstand 1).  Unlike the other seats, these ones had backrests… yes!! Although our favorite driver, Sebastian Vettel, didn’t win, we had a great time!  The loudness that the cars produce is so invigorating, that it made me want to stand up and cheer the entire time! 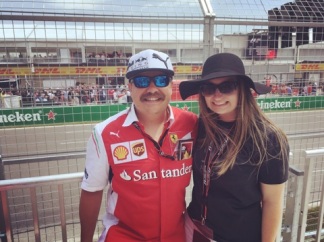 This was such an exciting event to be apart of!  One of my favorite parts is that at the end of the race, everyone jumps over the fence and onto the track so that they can run to the podium.  Of course we had to participate!

Some tips for the race:

If you have an opportunity to go to a Formula 1 race, I would highly recommend that you do it!  We had a great time and are already planning on which race that we would like to attend next year.